Me and Jackson just outside Nelspruit, South Africa.

I finally took a day off last Friday, and travelled to South Africa for the weekend. Liz was running a race on Saturday, so I hitched a 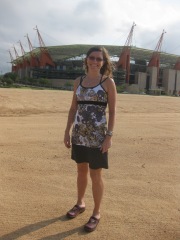 ride to Nelspruit, about 200 km west of Maputo. I felt the difference as soon as I crossed the border–from third world, to what seemed to be more like my normal. Roads are in good shape, the land is irrigated and cultivated, buildings are well maintained, no garbage, malls, good medical services, everything is stocked, etc. Ironic that in Nelspruit it is not safe to walk alone at night.

Liz dropped me at Jorn’s B and B…an immaculate little place where everything has been carefully thought out; everything is just so (run by a German). This cute little dog was there to greet me and Johannes, a very gentle, man made me feel welcome.

A very nice man–Jackson– picked me up and brought me to a mall for dinner. Safer that way he said. I had a nice steak and a huge glass of wine for about $14. In fact food and accommodation here in Nelspruit are quite inexpensive, and top-notch quality and service.

I had not planned ahead, and unfortunately was not able to get onto any local tours of what they call the “Panorama Route,” but negotiated a deal with Jackson to bring me to a few places. He picked me up at 10 am Saturday morning, with our first stop being the Sudwato caves, a huge system of dolomite caves inside a mountain, formed hundred of millions of years ago. Stalactites, 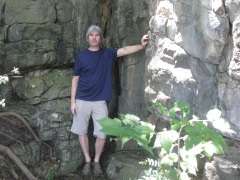 stalagmites, and all kinds of other formations that have taken millions of years to create. The guide pointed to one that was quite small, but grows only 2.5 cm. every 100 years! Part of the cave system had been excavated to build a 400 person amphitheatre where they have concerts and other events. Something about the type and porousnous of the rock make the acoustics incredible. I hadn’t really thought that I’d enjoy the caves, but it ended up being a pretty cool experience.

Then onto the chimp sanctuary where they rescue and rehabilitate abused chimps from all over Africa. Some come from circuses where their fingers have been cut off. Some were bought and sold as pets, and become abused once they are not quite so cute and cuddly anymore, and clearly can’t be kept as pets. Many have been fed junk, given booze and cigarettes; in fact many arrive at the sanctuary as full-blown alcoholics (maybe a whole new clientele for my wife!). Sorry…not funny.

Each of the 34 chimps had a very unique and tragic story of being abused. Cozy is regarded as the crazy uncle by one group of chimps. He was given experimental “test” drugs for many years by a drug company. When they did not need him anymore, he was sold to a circus. Then he ended up on the street of Italy, beaten, castrated, and abused by his owner so he would perform tricks. No wonder that now he is a little crazy and not fond of humans. In fact none of the chimps are. No surprise.

Chimps are now being poached by the truckload in different parts of Africa. Their numbers in the wild have dropped from 1 million to 120,000. Apparently chimp meat is an expensive delicacy, but I can’t imagine eating something that shares about 98% of my DNA.

But really the best part of the day was spending it with Jackson. He is from Zimbabwe originally, and has been in South Africa for about 20 years. He is married with three kids, and is about 43 years old. he is VERY talkative, with a very easy temperament. And very wise. He talked about all kinds of things during our time together, about his country, culture, traditions. But he also had some simple but profound wisdom on life, relationships, marriage, career, purpose, business. Jackson is not much of a listener granted, but that was OK by me. I was happy to just soak it up. I mentioned surfing at one point, and how much I love it, but that I’m not that good at it. “Not that gewd (good) implies comparison to someone or something else,” Jackson said. “And that just doesn’t matter.”

While I was touring the chimp sanctuary, Jackson picked a bunch of leaves from the gum tree, and gave me a whole pile of them. You boil them and inhale the vapour, and apparently cures colds, the flu, chest problems, and congestion. I tried it Sunday night, slept like a baby, and woke up feeling great Monday morning.

It is very curious sometimes how and why we meet certain people. Jackson was put in my path for a reason and I am grateful. “I’m happy to see the sights,” I said to him, “but the best part of the day was spending it with you.”

Saturday night I enjoyed a lovely meal and wine tasting with Liz and her friends at their B&B. Beautiful food and wine for $25. And on the way back Sunday, we had to slow down for a family of baboons crossing the highway, from one banana plantation to another! It didn’t really phase Liz, but it certainly got my attention!

All in all a real treat. I welcomed change if scenery, and a nice break from the big city and everything Maputo. Although it did make me think…I travelled from third world to “civilized” country in a couple of hours, and yet it’s not safe to walk the streets at night in much of South Africa apparently. A mugging here could easily be a murder. Not so in Maputo.

But what both countries have in common is what little value they place on human life. Everyone is expendable. If I got knocked down by a car in Mozambique for example, life would carry on, and there would be few repercussions. About two weeks ago, a woman jumped from an apartment building, landing on a car many stories below. This happened steps from my office. Two hours later, some people showed up to clean up the mess (not really sure who they were). The way they treated the remains was appalling. They unceremoniously scooped up the remains and shovelled it into the car. No human dignity.

Life means very little, but the pursuit of money means everything. And money means corruption, which starts at the very top. It’s really quite depressing. So if you live in this environment, how do you not become cynical? How do you not get overwhelmed by an overriding feeling of futility?

On the work front, we hosted an international conference this week. Organizing something like this here is very different from home. Everything is last minute, and many things don’t get done. Getting a quote, approval, or signature is a major ordeal. There is rarely the sense of urgency I am used to when approaching a deadline. Everything takes much more time, especially if you need other people. Internet is unreliable, as are printers and other office basics.

Helder and Ilate the night before the conference. We just stuffed a conference bags!

Just trying to get a few extra tables set up at the conference took three separate meetings with a total of eight people! WTF! One of the only times since I arrived where I kind of lost it, but at least they don’t understand English swear words. I get overwhelmed by it all sometimes and wonder how we will ever get the job done, but I have also learned to surrender to it. I flip back and forth between maddening frustration and surrender. At times I have been very critical of some people and situations and that does not feel good.

I am trying to break down barriers and create relationships everywhere as best as I can, including work, and that has taken me a long way here. But I also realize that I will not succeed in connecting with everyone, and not everyone will like me (as hard as that may be to belive!). But that’s ok. I am learning not to care so much. I do the best I can and try not to get too wrapped up in the outcome. 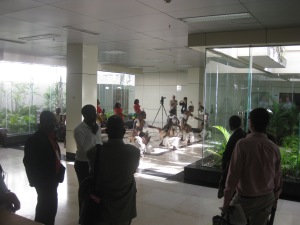 One (of many) though-provoking moments was at the opening. There were 12 African musicians in full costume playing and dancing. Having been here now for six weeks, it seemed like the most unnatural thing to be happening in a conference centre. But I guess if I were a participant travelling from another country, I can see how this might feel like a fun, typical, and “cultural” way to kick off the conference. We also managed to get lots of media attention….TV, radio, newspaper, and online which was a big plus.

And on the first day, this paraphrased thought from Neil Donald Walsch came my way. The timing was perfect:

In the end, the conference came and went and was successful. Certainly not exactly the way I would have wanted it in a perfect world, but well received overall. I am and proud of what we were able to do under the circumstances, and in particular, the in depth media coverage by Mozambique’s biggest TV station. I worked this one really hard, and this story will be a very important example to demonstrate the power of working with media to shape the message on why education reform is good for the young people of this country, and how they can access these new programs.

With two weeks to go, I still have lots of work to finalize

And thoughts of home are swirling around in my head.

A bit of a tangent here, but I will wrap up a story I watched on CNN that really bothered me about the Israeli soccer team. They recruited two Muslim players for the first time ever, and the reaction of many fans has been nothing short of hateful, and the hate is spreading. Many are violently opposed to this, and will only support a purebred team. In the words of one fan “muslims are my sworn enemy, even if they are a good person.” Somewhat ironic given what their ancestors lived through. This hard line, inflexible, intolerant approach reflects what I think is perhaps the biggest problem in the world today. How can their ever be peace with this attitude?

I will close this week’s post with a short but relevant and poignant story from the Dalai Lama:

Someone asked the Dalai Lama, “Why didn’t you fight back against the Chinese?” The Dalai Lama said with a gentle smile, “Well, war is obsolete, you know.” Then, his face grave, he said, “Of course the mind can rationalize fighting back…but the heart, the heart would never understand. Then you would be divided in yourself, the heart and the mind, and the war would be inside you.”